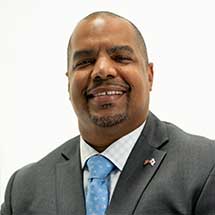 Ainsley serves as Graystar Legal’s Operations Manager. He is tasked with streamlining internal business processes and systems. His career in the Legal Field spans 20 Years in both Non-Profit and Government Supervisory positions. He was born & raised in Greensboro, NC. He graduated from North Carolina Central University with Degree(s) in Criminal Justice and Political Science. He received his Master’s in Criminal Justice from Michigan State University, with an Interdisciplinary concentration in Urban Studies. Ainsley is a proud Husband and Father, Rotarian, and volunteers with the local Youth Athletic Association and as a Cub Scout Den Leader. In his free time, He enjoys Firearm training and spending countless hours with his son’s model railroading and railfanning. He attends Triad Baptist Church in Kernersville where he has served as a Ministry Volunteer for several years.